From Barbaripedia
Jump to: navigation, search 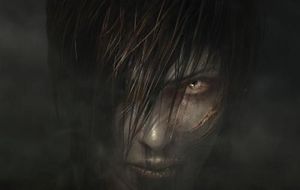 Ghouls are humans, elves, or other humanoids who have been corrupted by the dark magic of sorcery or demons. Though they have never truly died, they resemble the undead, existing in a state between life and death. They grow gaunt with pale skin and dark sunken eyes and are suffering from madness, but are also filled with unnatural vigor and are much more cunning than any beast. Their clawed fingers can crush a mans throat and leave deep rends in the flesh of their victims, and their teeth have the strength to bite through bones, as they regain their strength by feeding on the flesh of humans and beasts.

Many ghouls once were adventurers and treasure hunters who delved too deep into ancient places where the living are not meant to tread, or what remains of those who become slaves of dark sorcerers or demons.